The taste of Phenibut is one of the things that make some people avoid it despite the huge number of benefits that it has. People that start doing research on Phenibut find out very quickly that it tastes awful and that many users recommend avoiding it simply for this reason. This is true of many supplements including kava kava. However, you do not have to let the bitter taste of Phenibut deter you from taking it. We will be looking at exactly how Phenibut tastes in this article as well as some of the things that you can do to combat that taste and make it palatable.

How Does Phenibut Taste?

So, how does Phenibut taste exactly? The truth is, it tastes pretty awful. Phenibut is extremely bitter and if you were to take it by itself, you might actually end up gagging or vomiting. However, no one actually takes Phenibut powder like this. Even if you were to take it with straight water it would have a lot more palatability than the powder by itself. Some people do use water to mix it in, but there are other ways of making it taste better. The bottom line though is that Phenibut tastes pretty awful by itself and you have to find other ways to take it. 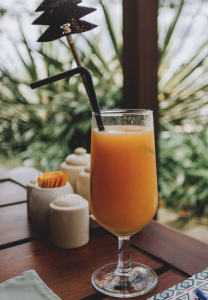 There are some ways to make Phenibut taste better. Let’s look at a couple of these ways so that you can know how to use it without having to deal with the bitter taste. There are some other considerations such as methods of administration that make it act faster, but if you want palatability, then the two methods listed below are the best ways to take Phenibut.

One of the things that you can do is mix Phenibut with orange juice to make it taste better. You can actually do this with lots of different juices. You do want to take something that is sweet though, to counteract the bitter taste of the medication. For example, grapefruit juice doesn’t work very well with Phenibut powder. However, grape juice, orange juice and other juices that have a sweet component will work. How much you mix with how much juice will depend on personal preference, but 250 milligrams mixed into eight ounces of juice will mask the taste really well.

Another way that you can take Phenibut is in capsule form. If you take a gel cap, you are not going to taste Phenibut at all. The problem with this method of administration is that you have to wait for your stomach to dissolve the gel cap before the medication starts working. That means a longer delay between the time that you take it and the time where it starts having an effect on your anxiety or brain health. This is probably the most common way that people take Phenibut without having to add it to something else like juice.

The bottom line is that there are several different ways that you can take Phenibut to combat the taste, but there is no doubt that by itself, Phenibut taste pretty awful. It is recommended that you try the powder with juice and the capsule form to determine which one you like best. Mixing the powder with juice makes it work a little faster, but the taste is worse. On the other hand, you can taste nothing at all when you take the gel capsules, but it takes quite a bit longer for the medication to start working.